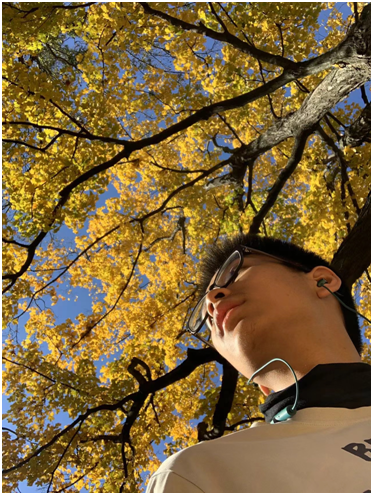 This article will provide a glimpse into Watermelon Song Yuanfeng’s student journey from ESC to a highly selective private research university in Nashville, Tennessee.

Watermelon is an ESC alumni from the Class of 2020 who recently finished his first semester at Vanderbilt University. Watermelon joined ESC at the beginning of his Gao 2 year as a bright student from the Beijing National Day School (BNDS) which allowed him to focus on preparing for summer programs, school choices, and make sense of his extracurriculars. During his gap year, Watermelon was able to make a film (which is still in post-production), do a month-long internship for a small start-up film company to assist with editing and continuity on set, and attend a film festival to admire independent works while fostering new connections. Watermelon describes his on-campus experience so far as “amazing,” enjoying Vanderbilt’s beautiful campus and the cool city of Nashville as well as an assortment of dining halls, nice weather, and a huge recreational center.

Looking back to his college application experience, Watermelon relayed that ESC has “a very good service on the essays themselves but also the planning and decision making.” He most appreciated ESC’s guidance in regards to school research and general strategic planning for what schools to apply to for Early Decision I, Early Decision II, the range of Regular Decision schools, and Early Action schools:

“At that time we were very hesitant about whether to ED II or not because it’s the same deadline as RD, so the database of ESC was a really important reference to see how competitive the Chinese international student body was and make an objective judgement of the risks that we were willing to take. So at last, I’m glad that I did ED II Vanderbilt.”

Upon further reflection, Watermelon felt that he was “pretty lucky” to be accepted to Vanderbilt in ED II as he was the only student to get in during the 2020 application cycle from his high school class, even though many of his peers had similar testing profiles and GPAs.

Watermelon was able to find his “perfect fit” in a college through conducting thorough research. He observed that while many Chinese students and parents tend to fixate on school ranking, ESC counselors put a lot of emphasis on research to compare and contrast different schools to find the best fit: “It’s your four years, you got to know what school you want, what a school is really like.”

Since entering college, Watermelon is writing a lot of essays for his classes, and he credits ESC for learning “the ability to self-edit”:

“The first draft is never good. It’s definitely trash. You will see the problems. Now I can see the problems with my first draft and at least know the direction of how to fix them. And also the process of brainstorming and outlining. Because now before every essay, I will spend one or two days just brainstorming and outlining, expand and then narrow down different ideas to find which ones are the most relevant and useful.”

Although Watermelon is keeping busy with his studies, he has also seen a variety of blockbuster and independent movies to keep up his interest in film from Shang-Chi and the Legend of the Ten Rings to French Dispatch by Wes Anderson. Shang-Chi, in particular, was the first film Watermelon saw in America, and he was comforted by the first fifteen minutes or so of the movie being in Mandarin. He is currently working on translating bilingual subtitles for the film he made during his gap year. Watermelon hopes to participate in the Vandy-in-Hollywood summer internship program, which annually places Vanderbilt students to work in the LA entertainment industry. He also hopes to TA for an introductory film production class as a way to “audit” a film class. While he is still undecided about his major, he is appreciating taking different course requirements to explore a variety of subjects within and outside of the social sciences and humanities.

Watermelon’s academic plate is very adventurous. Next semester, he plans on taking a creative writing workshop, an American government course, Digital Humanities, and continuing with Spanish as well as taking two other discussion-based seminars, one being a Japanese and Portuguese cooking class and the other being in the Human and Organizational Development (HOD) department, which belongs to the Peabody School of Education.

While Watermelon is not in any campus orgs yet, that does not mean his social calendar has not been packed! He has been very socially active, attending the Dean’s dinners to learn about different topics and cultures, going on photography trips with friends, and getting to know his hallmates.

Watermelon’s favorite memory at ESC was participating in the online mini workshop series after application results came out to learn about sports, the American election system, and popular culture which he has found “very helpful” in his daily conversations with friends on campus, making it easier to fit in. Watermelon advises incoming freshmen to “make very good use of the first semester” and reach out to make friends before people make their “little groups.”

On the topic of socializing in college, Watermelon has the following advice for international students who are currently applying to college:

“Scores are important but in order to get into and survive in an American university no matter how high or low it is ranked, ‘don’t be nerdy.’ In your application, don’t fit yourself into the stereotypical nerdy, high-achieving Chinese student. You’ve got to have a life. You have to show them what your life is like. There is so much more. That will also be helpful after you get into college, because if studying and being a good student is all you have, you’ll feel really excluded.”

The ESC community is so happy to have guided Watermelon in his student journey, and we are excited to see what he does next!